The data plane performance of the cloud native network directly determines key performance metrics such as the throughput and service response time of the entire system. Data plane acceleration is an important means of system acceleration.

Main data paths in a pod are in the kernel protocol stack whose performance has been continuously analyzed and optimized. However, its performance is still far lower than that of user-mode protocol stacks such as DPDK and AF_XDP. 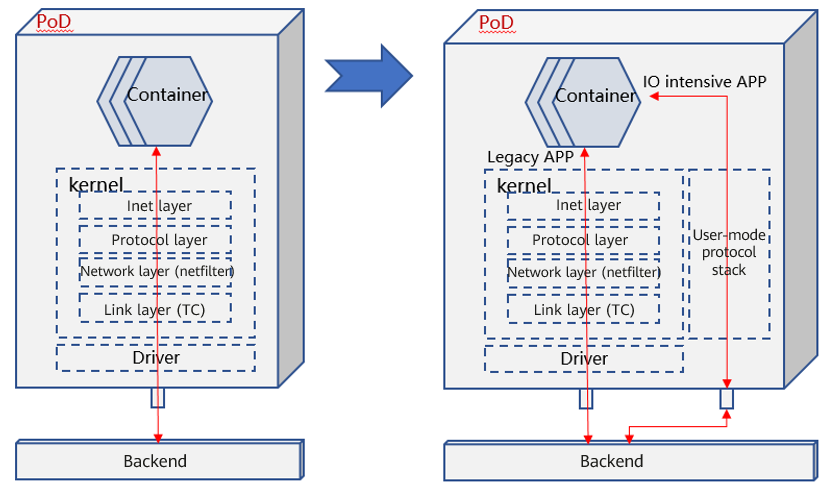 Solution: User-mode CNI (Gazelle CNI, which is under design and development by the high-performance network SIG of the openEuler community.)

The user-mode CNI can be implemented based on the DPDK and AF_XDP technologies which complement each other. Therefore, this solution must support the two technologies at the same time.

It has application values in scenarios where the control plane and data plane are separated, legacy and I/O-intensive apps coexist, and multiple tenants are isolated.

Communication between pods depends on the container network mode, which can be Bridge (default), Host, Container, or None. See the following figure:

Bridge: eth0 is enabled for each pod, and the pods are connected to a bridge (cni0 by default) through virtual Ethernet (veth) devices to communicate with eth0 of the node.

Host: Pods share the namespace with the node. Therefore, eth0 (as well as other interfaces) of the node can be identified by the pods.

Container: Pods share the namespace with other containers so that the interfaces of the target container can be identified and used.

None: No interface is configured. (It does not mean that there is no available interface. You can customize interfaces as required in this mode.)

In this article, we focus on the Bridge and None modes. In the None mode, the router is often used to solve communication problems. Therefore, we mainly analyze the acceleration of data paths in the bridge and router.

The acceleration solution is XDP over veth. In the XDP program, the help function is used to query the kernel forwarding information base (FIB) and complete forwarding actions similar to those of the bridge and router.

The entire forwarding path does not involve the kernel protocol stack and is processed at the driver layer.

The virtual network function (VNF) is a bridge or router. This solution is not dedicated for this scenario and can be applied to other scenarios as well. It is suitable for base software vendors.

In this article, the focus is virtual network acceleration, and a node refers to a VM.

Mainstream solutions for inter-VM communication include Open vSwitch, VMware virtual switch, Cisco Nexus 1000V, Huawei 1800V and Huawei EVS. Most of them use the DPDK technology for acceleration. 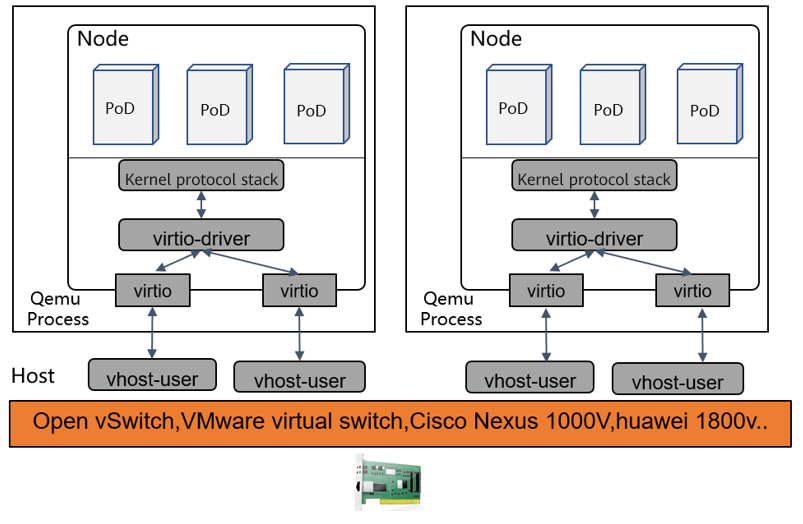 In terms of performance, the existing mature solutions are optimal. In terms of hardware availability, AF_XDP can be used to replace DPDK. AF_XDP provides slightly lower performance than DPDK, but can make up for the lack of hardware.

DPDK dominates communication acceleration between VMs on a bare metal host, and there is little room for performance improvement.

After network policies are defined, the control plane converts them into Linux iptables rules and delivers them to the Linux network data plane to control network access.

When the iptables rules are executed on the data plane: 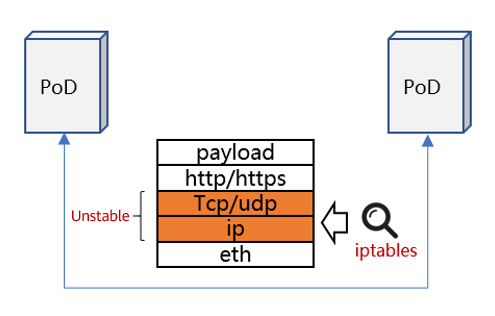 If a Kubernetes Deployment is translated into a unique cluster identifier and added to the network load and the data plane performs access control based on the identifier, the gap can be removed.

The solution details are as follows: 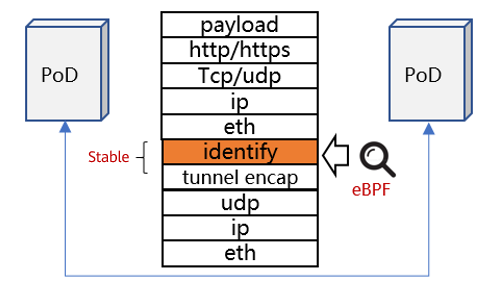 Although solution 1 brings good performance, it relies on CNI ISVs to redesign the CNI solution. Besides, tunnel encapsulation is added, which reduces the transmission efficiency. In terms of solution applicability, solution 1 is not favorable. Among many CNI solutions, only Cilium uses solution 1.

Most CNI solutions improve the data plane backend and use the eBPF technology to rebuild iptables.

Service meshes (such as Istio) are widely used in cloud native systems, which provide service governance capabilities for cluster management. 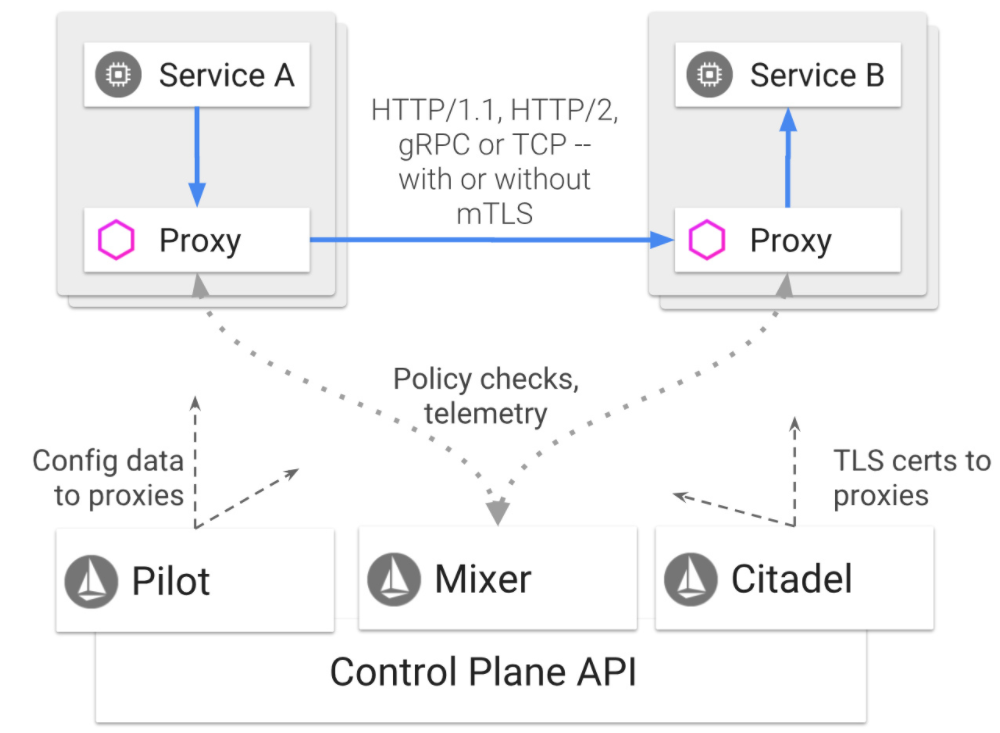 Istio deploys a proxy component (usually called sidecar) in each pod. This component takes over all external communication requests of pods and provides capabilities such as layer 7 load balancing, API traffic visualization, and topology management for pods. However, all data traffic is processed by the proxy, and data paths are prolonged. See the following figure: 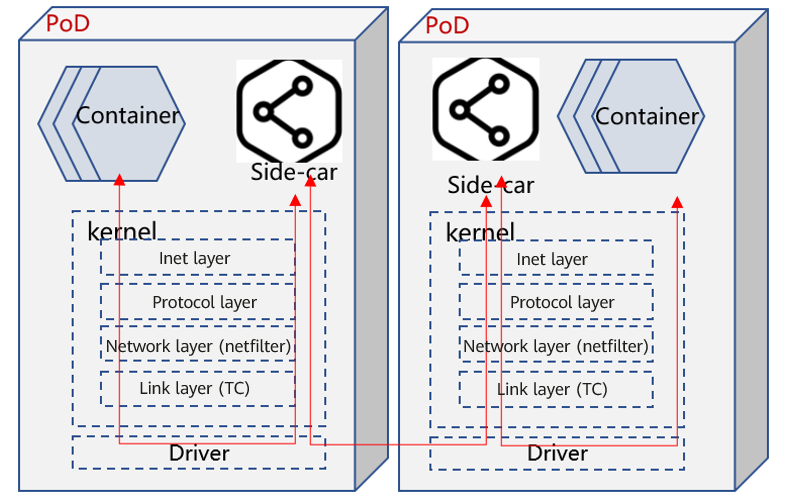 eBPF is used to implement the socket map solution. A pair of sockets of the TCP connection between the containers and sidecar in a pod is mapped. When a socket sends data, eBPF directly moves the data to the other socket and wakes up the thread to which the data belongs, to prevent it from entering the complete kernel protocol stack. 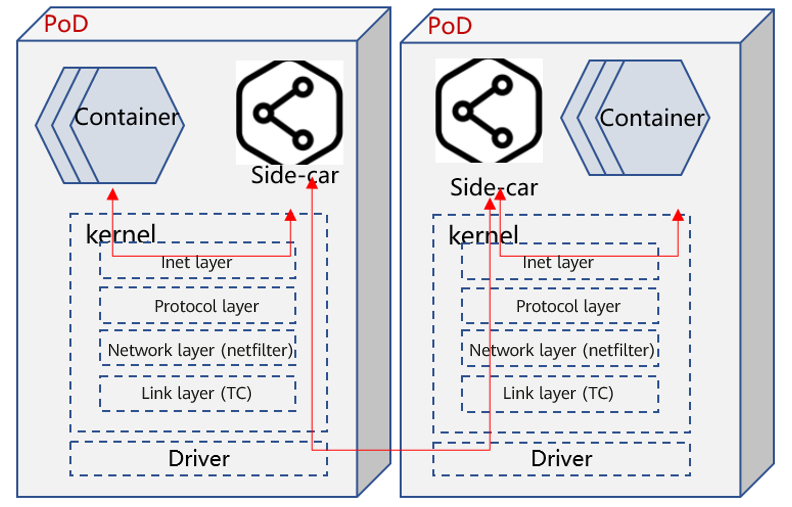 In addition to the service mesh scenario, the SocketMap acceleration solution applies to other scenarios as well, for example, communication acceleration between apps in the same namespace. Therefore, this solution is suitable for base software vendors.

To improve availability, Kubernetes proposes the concept of Service. It abstracts the service provided by an application as an endpoint and allocates an IP address or port to the endpoint. Then the Service is powered by multiple backend instances. In this way, services and program instances are separated and programs are deployed as multiple instances to achieve high service availability.

When a service is accessed in a cluster, the address needs to be converted based on the actual backend instance to redirect requests to specific pods through load balancing (LB). This process is controlled by kube-proxy, a Kubernetes component. It listens to the matching relationship between services and backends, generates LB data, and writes the data to the data plane. Currently, kube-proxy supports two data planes: iptables and IPVS. The performance of the latter is better than that of the former.

The following is an example of mutual access data flow between services: 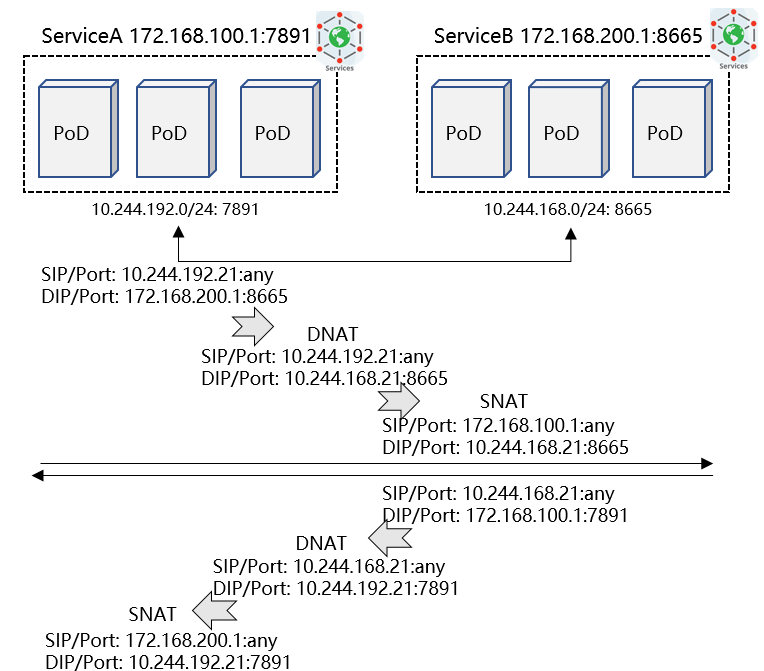 iptables has many restrictions that are described in preceding sections, and IPVS brings better performance. See the following performance test data. 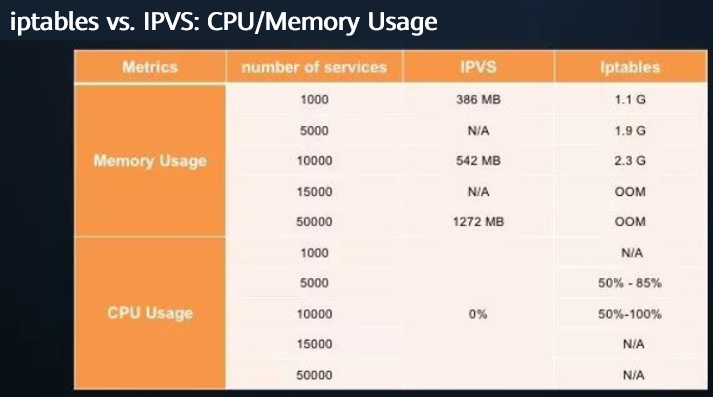 Currently, kube-proxy still uses iptables as the default mode. On the iSula platform, you can set kube-proxy to the IPVS mode during the installation.

The performance of IPVS is obviously better than that of iptables, but kube-proxy still uses iptables by default. Why?

A major consideration is compatibility. IPVS processes data in a different phase in a data path from iptables. In some scenarios, if IPVS and iptables coexist, compatibility problems may occur.

Therefore, some CNI ISVs (such as Cilium) simply replace the kube-proxy component and use the eBPF technology in their software to implement the process of addressing the backend of the Service. This solution is temporarily named LB powered by eBPF.

However, this solution is applicable to some CNIs. Most CNIs do not have this capability. To apply this solution to a wider range of scenarios, the technical idea of iptables powered by eBPF can be used.

A Kubernetes cluster sometimes needs to expose services to the outside of the cluster. Generally, there are three solutions:

Ingress is a mainstream solution. It uses multiple types of Ingress software, including HA Proxy and Nginx. Nginx is the most common Ingress solution.

openEuler has optimized the Nginx performance by more than 50% in some scenarios. For details about the optimization solution, see the Innovation Drives the Future of openEuler.

We here summarize the performance optimization solutions for each scenario and the software vendors that are suitable for providing such technical solutions.