Common QEMU + Fuzzing implementations include the qemu-afl mode and various tools that use virtualization technologies to fuzz IoT devices.

This article describes the fuzzing framework for QEMU that performs fuzzing on Hypervisor. It adopts the Qtest framework to emulate the guest OS's read and write operations on devices and uses the heuristic algorithms of libFuzzer to collect massive amounts of data. This framework originates from the Google Summer of Code 2019 project and is added to the master branch in QEMU 5.0.0 and later versions.

Virtualization is to use a user-mode program to process the access of a device emulator to the memory and other special hardware when only the user-mode memory is used. To emulate devices with different architectures and instruction sets, QEMU adopts object-oriented programming and implements the QEMU Object Model to describe device models.

In short, the guest OS considers that it can directly communicate with hardware devices on the host OS. Actually, QEMU acts as an intermediary as follows:

For this experiment, we use the Docker environment on the local Windows Subsystem for Linux (WSL).

Problem with the Environment #

To facilitate deployment, Docker is used to configure the experiment environment: image path

Using the Fuzzer in Simple Mode #

After configuring the environment, run the following commands to compile and run the fuzzing program. The libFuzzer output is displayed.

The QEMU Fuzzer also supports libFuzzer compilation instructions, which can be viewed by running the -help=1 command.

To view fuzzing results, run Clang Sanitizer, a tool that uses the CORPUS parameter and modifies compilation instructions. After fuzzing is complete, run the llvm-cov command to convert the generated default.profraw file into an .html file.

To add a new fuzzer, perform the following:

Using the Fuzzer in Generic Mode #

Writing fuzzers for specific device models is time-consuming and laborious, especially for device drivers that are not included in libqos. QEMU provides the generic-fuzz option to perform preliminary fuzzing on all devices, including PIO, MMIO, and DMA. To enable generic-fuzz, set the following environment variables:

OSS-Fuzz is an integrated fuzzing tool that fuzzes all objects by default. The official Dockerfile for environment setup is provided, and the startup of the generic fuzzer requires additional settings of environment variables. Therefore, QEMU defines some device models in the tests/qtest/fuzz/generic_fuzz_configs.h file for OSS-Fuzz. In addition, developers can add new device models to the file.

When you reproduce a crash, the QEMU that does not contain a fuzzer is required to filter out false alarms and enhance the debugging function. You can use the OSS-Fuzz script to create a one-line reproducer.

The QEMU Fuzzer provides two entry points for libFuzzer, which are called after the main function of libFuzzer is called.

The Fuzzer process is reset after each fuzzing operation. In addition, the QEMU status needs to be reset. The following are two methods to reset the QEMU status.

Dependencies of the QEMU Fuzzer #

The implementation of the QEMU Fuzzer depends on the libqtest and libqos libraries. For details, see Testing QEMU emulated devices using qtest. This document describes the basic principles of Qtest, APIs, and methods of adding test cases.

Qtest is a framework used to perform unit tests on hardware devices emulated by QEMU. It consists of the Qtest Client and Qtest Server. The two communicate with each other through UNIX Socket and support instructions such as PIO, MMIO, interrupt, and QMP.

During running, libqtest.c starts QEMU as a subprocess. The main function for starting QEMU is in vl.c. In the test scenario, the qtest_init() function of qtest.c is called to initialize the Qtest server.

The following shows the relationship between the Qtest client and Qtest server.

libqos is a device driver framework used to compile qtest cases and provides APIs related to memory, PCI, and virtio. It provides the following functions:

The preceding two dependencies are designed for QEMU function tests and depend on the test input. Fuzzing improves the test input quality by adding randomness and mutation algorithms to the input. In this way, libFuzzer can be used to hook the Qtest input to improve the test efficiency. The following shows the overall structure of the QEMU Fuzzer. 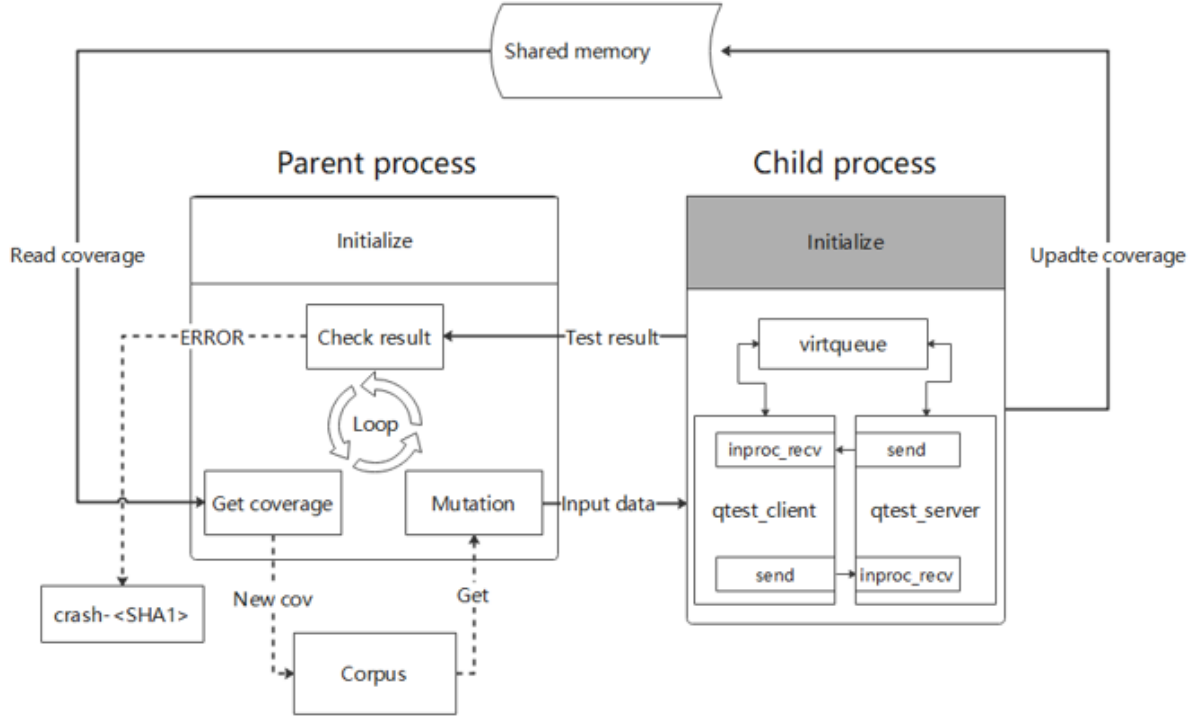 In the source code:

QEMU does not have a high level design description document - only the source code tells the full story.

Therefore, it is essential for QEMU developers to learn about the source code. This section uses the virtio-net device as an example to analyze the QEMU fuzzing process. The code path is tests/qtest/fuzz/virto_net_fuzz.c. Virtio is a paravirtualization technology. It requires the host OS to emulate devices and the guest OS to drive devices. The following shows the working process. 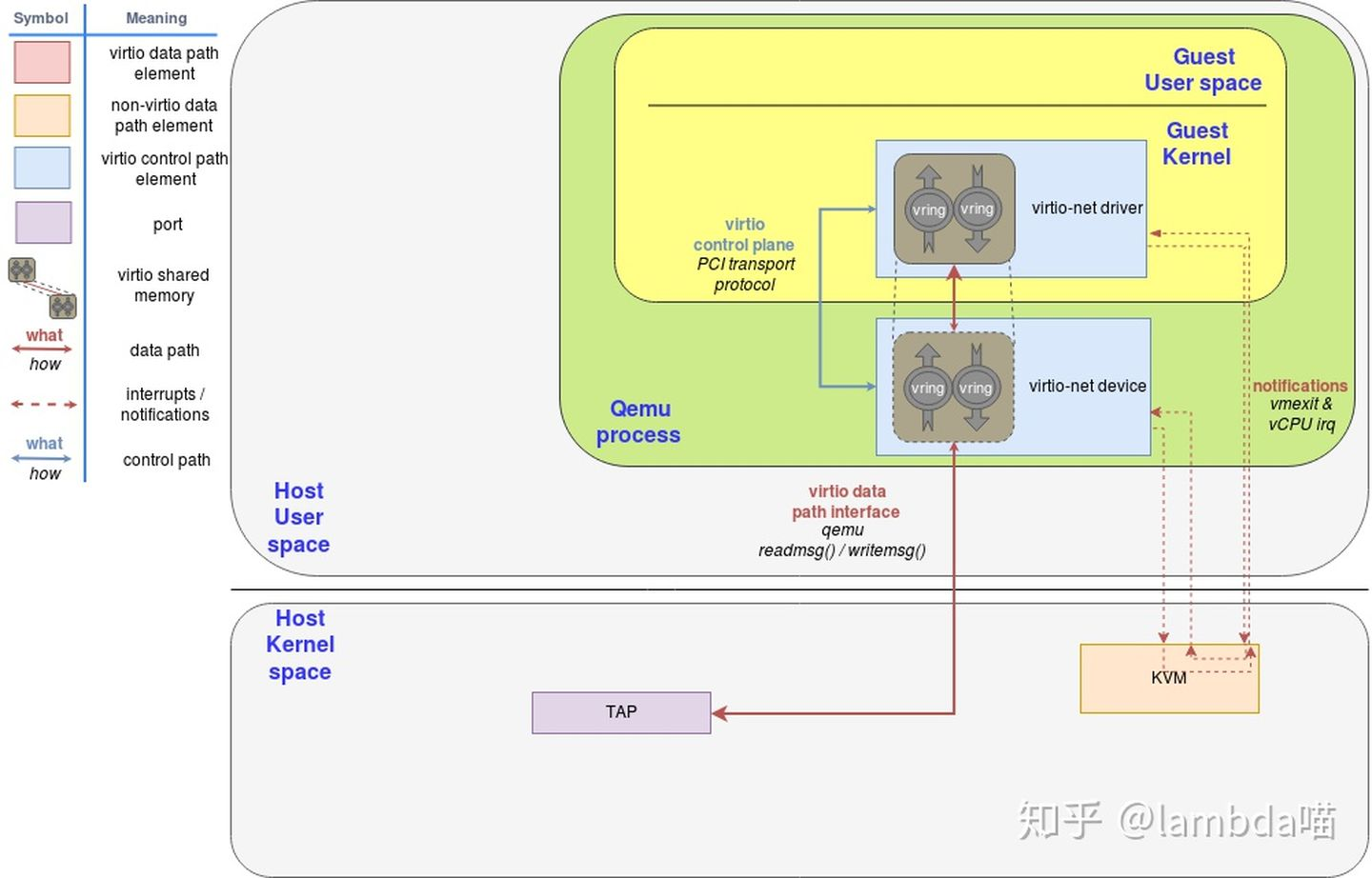 The following uses virtio-net-socket as the major fuzzing target to analyze the parameters and the functions involved in the parameters.

The first parameter is the pointer that points to the temporary object of FuzzTarget. This object is defined by fuzz.h and contains identification information and many callback functions related to fuzzing. It is described as follows:

virtio_net_pre_fuzz initializes the shared memory used by qos path and fork fuzz. virtio_net_fork_fuzz forks the child process and calls the virtio_net_fuzz_multi function. This function uses the user-defined vq_action to manage random data, adds data packets to virtioqueue based on the arrival of data packets, and kicks out the data packets. The main loop is then run.

The second parameter indicates the name of the used device. In this example, the value is virtio-net.

The third parameter is the structure about the test options provided by qgraph.h. The before parameter accepts functions whose prototype is QOSBeforeTest. The virtio_net_test_setup_socket function specifies the backend of the QEMU network device as socket. It facilitates communication with the virtual device and sends the data packets of the virtual device to the host network.

This part briefly analyzes a CVE vulnerability on QEMU discovered by libFuzzer.

The QEMU VM escape vulnerability has been common in Capture the Flag (CTF) competitions and Common Vulnerabilities and Exposures (CVE), for example, CVE-2020-14364.