The memory allocator ptmalloc, that is, malloc in glibc, implements malloc(), free(), and other functions to support dynamic memory management. The allocator runs between the user program and the kernel. It responds to the user's allocation request, applies for memory from the OS, and allocates the memory to the user program.
To ensure efficient allocation, the allocator generally pre-allocates a memory chunk larger than that requested by the user, and manages the chunk by using a certain algorithm. The memory released by the user is not returned to the OS immediately. Instead, the allocator manages the released free space to meet the subsequent memory allocation requests of the user. That is, the allocator not only manages allocated chunks, but also manages idle chunks. When responding to an allocation request of the user, the allocator first searches for a proper chunk in the idle space for the user, and allocates a new chunk only when no proper chunk is found in the idle space.

Chunk is the minimum unit for glibc memory management. The following figures show the data structure of a free chunk and an allocated chunk respectively. 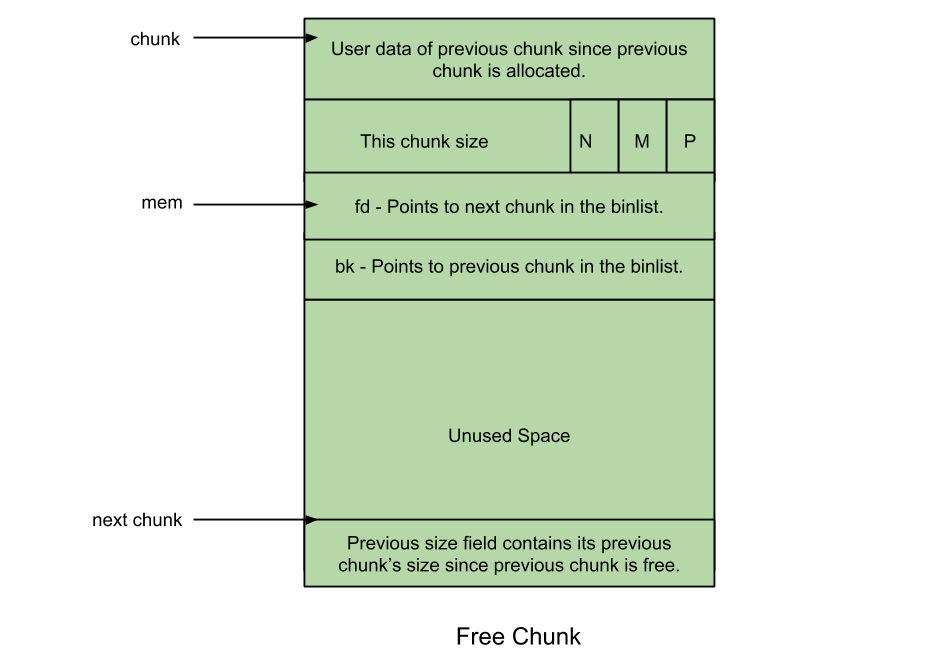 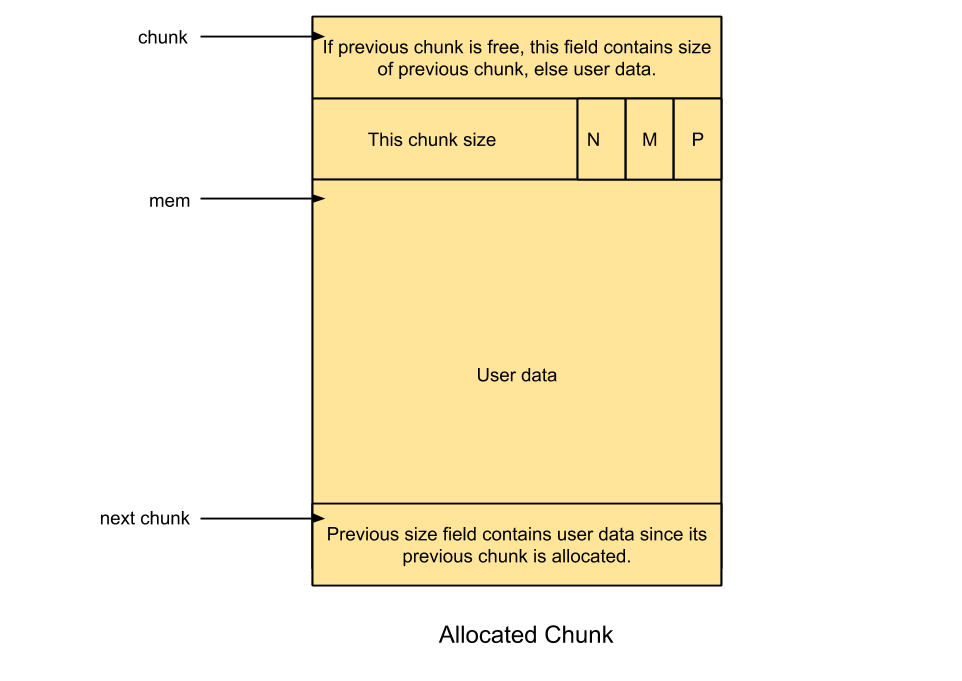 fd: forward pointer that points to the next chunk in the same bin. It exists only when the current chunk is not used.

bk: backward pointer that points to the previous chunk in the same bin. It exists only when the current chunk is not used.

An arena is a structure that contains elements such as pointers pointing to chunks of different types. Each thread obtains an arena when applying for memory. Arenas are classified into the main arena and thread arenas. There is only one main arena. When a new thread applies for memory, it obtains a free arena from a global linked list. If no free arena is obtained and the number of arenas does not exceed the maximum value (M_ARENA_MAX), malloc creates an arena.

A heap consists of a frame header and chunks. Glibc applies for and releases memory from the OS in heaps.
There is a heap in the main arena and a heap in a thread arena when it is created. When the size of the heap in a thread arena exceeds a certain value (default: 64 MB), a new heap is added. The heaps are connected as a linked list, and the number of heaps is not limited. When a heap is created, there is only one chunk called top chunk. Every time a memory request is received, a chunk is split from the top chunk. The top chunk is always at the end of the heap.

The following figure shows the memory distribution of the main arena and a thread arena with only one heap: 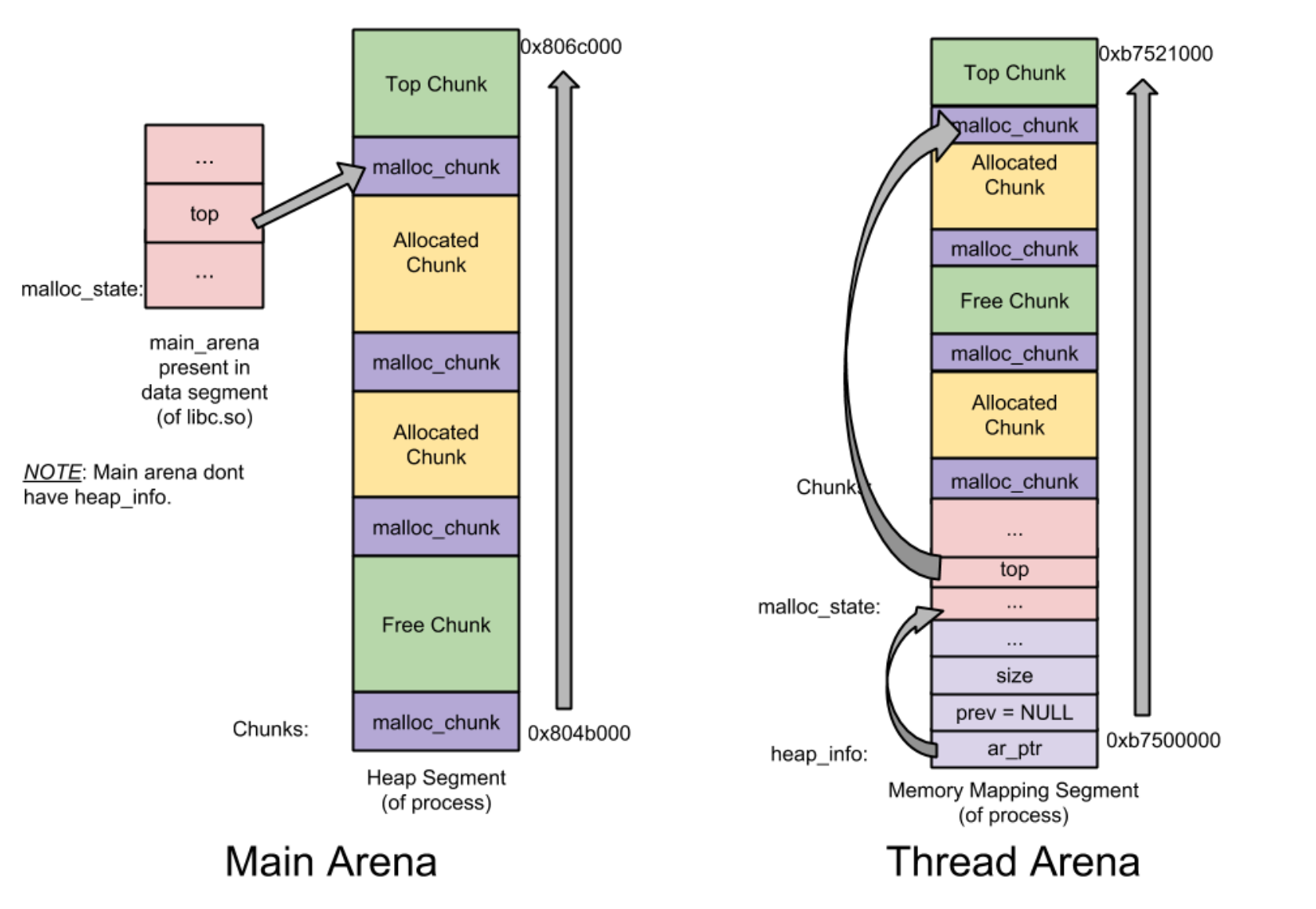 The following figure shows the memory distribution of a thread arena with multiple heaps: 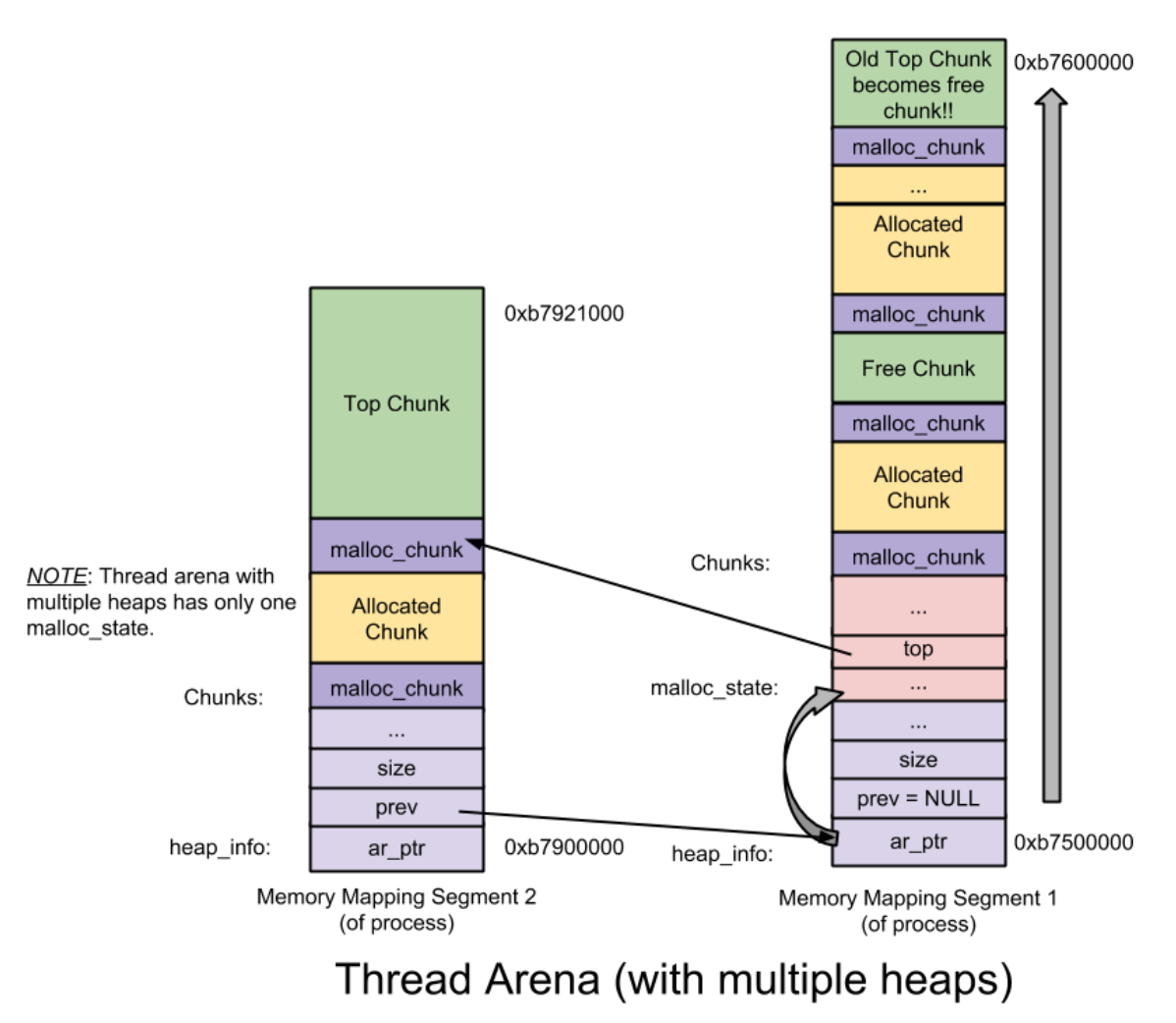 Glibc provides several linked lists to manage chunks of different sizes. All variables except tcache are member variables in the arena structure.

Tcache is a cache mechanism introduced by glibc to improve the performance of applying for and releasing small chunks. A single tcache has 64 linked list items, and each item can store a maximum of seven chunks of the same size. The data structures of the tcache linked list is requested from the heap managed by the arena. When the thread exits, the data structures are released back to the original heap. The tcache is a thread variable, and each thread has its own tcache. Therefore, there is no upper limit on the number of tcaches theoretically. 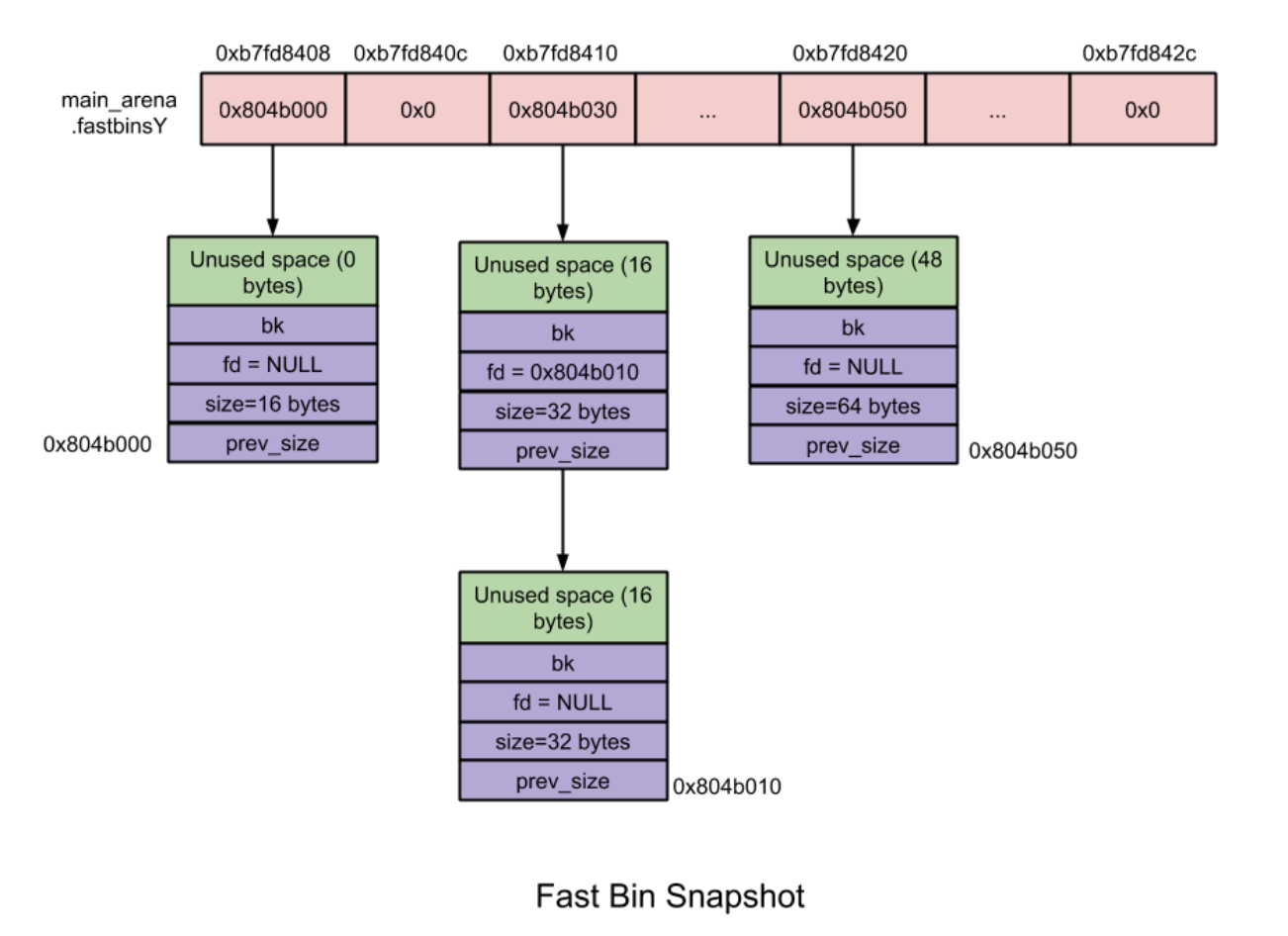 Chunks in the fast bin, small chunks, and large chunks, after being freed, are put into the unsorted bin to accelerate memory application and release. There is no rule for the size of chunks managed by the unsorted bin. 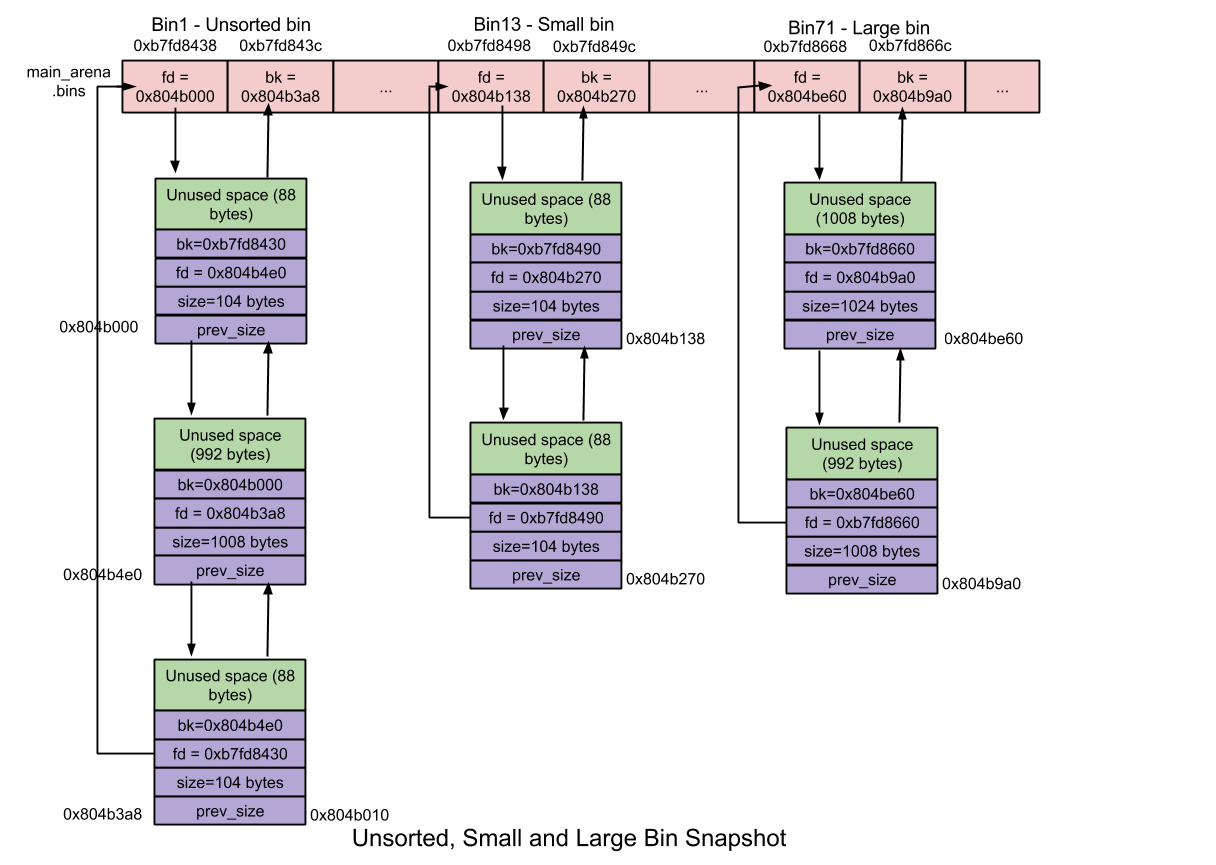 The size of chunks managed by the small bin and large bin increases according to a certain rule. The linked list item index of a chunk of a specified size may be computed by using a specific algorithm, so as to locate the chunk.

To balance performance and memory usage, the malloc function of glibc implements a complex memory cache mechanism through a series of memory management linked lists. The following figures show the basic principle: 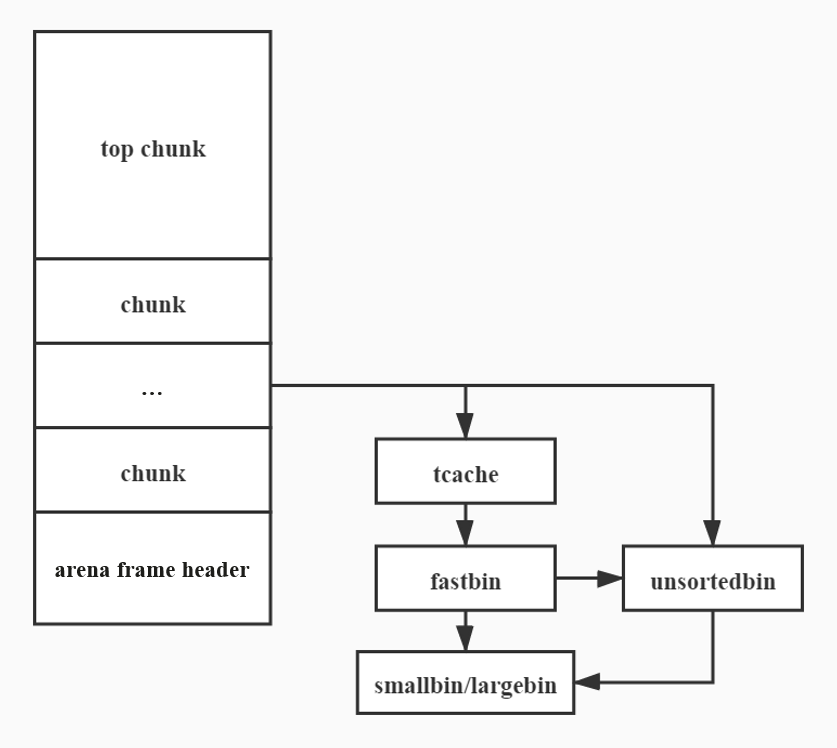 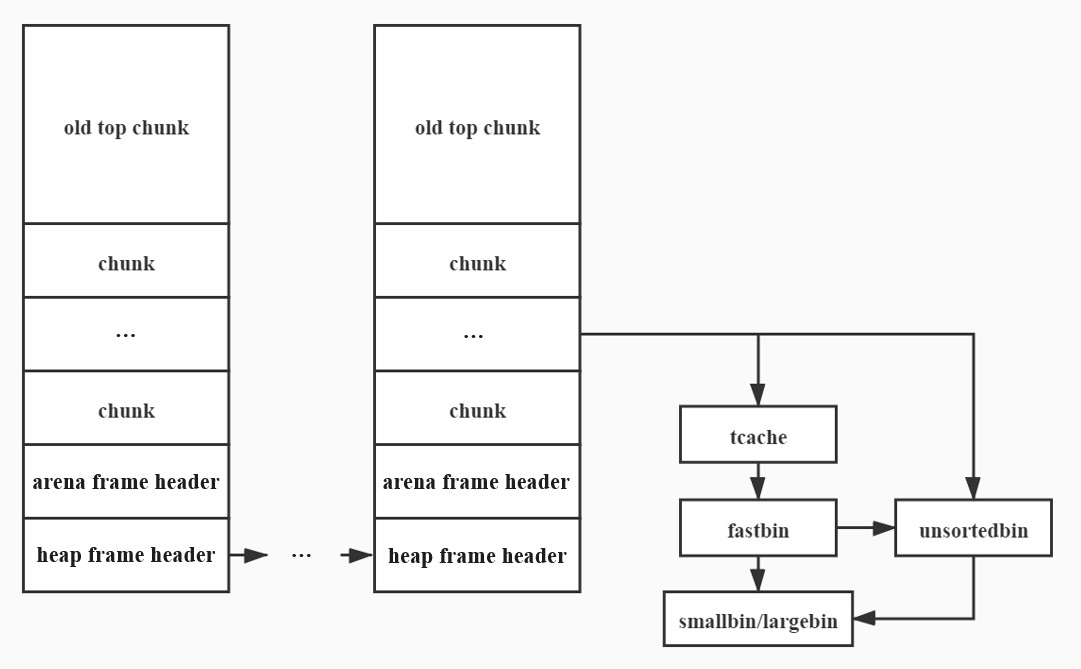 When a user applies for memory, the malloc function applies for a heap from the OS, divides the heap into chunks, and uses different linked lists to manage the chunks based on the chunk sizes. For subsequent memory applications, memory is allocated in the following order: tcache→fast bin→unsorted bin→small bin/large bin. The memory release process is in the reverse order.

Glibc provides a series of adjustable parameters. You can adjust these parameters by setting environment variables to change some behaviors of malloc.

This method is compatible with glibc earlier than 2.26, but does not support tcache-related settings.

malloc_stats is an interface provided by glibc for collecting statistics on the memory usage of the current process. The statistics are accurate to bytes. The declaration of malloc_stats() is as follows:

malloc_stats() can be added to macros during code writing or directly called during GNU debugging. The output of malloc_stats() is as follows: