BlogClean Code in the Eyes of Compiler Engineers (1): Loop Interchange

Clean Code in the Eyes of Compiler Engineers (1): Loop Interchange

This blog uses loop interchange as an example to describe how to write code to obtain better performance.

Loop interchange described in this blog mainly uses spatial locality. Spatial locality refers to that recently referenced memory locations and their surrounding locations tend to be used again. This is common in loops. For example, in an array, if the third element is used in the previous loop, it is very likely that the fourth element will be used in the current loop. If the fourth element is indeed used in the current loop, the cache data prefetched in the previous iteration is hit.

Therefore, array loop operations can utilize the spatial locality feature to ensure that accesses to array elements in two adjacent loops are closer in the memory. That is, the smaller the stride when the elements in an array are accessed cyclically, the corresponding performance may be better. That is, a smaller stride can lead to better performance to cyclically access array elements.

Next, let's see how arrays are stored in the memory. 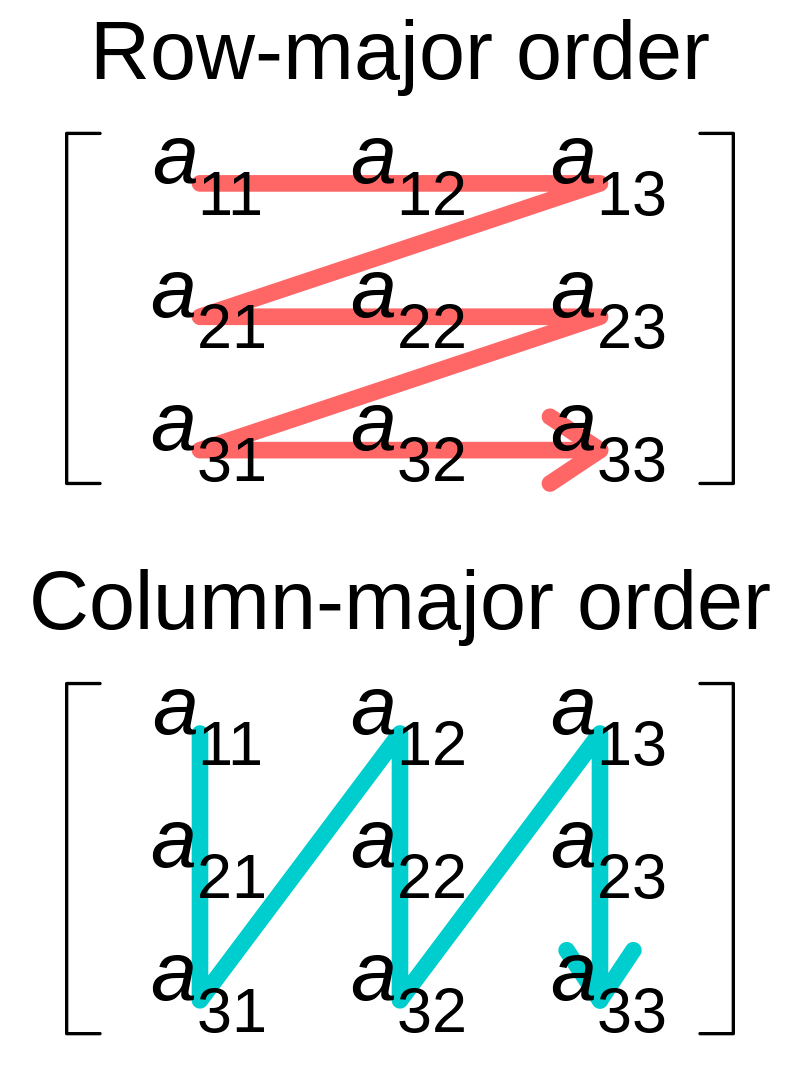 While the terms allude to the rows and columns of a two-dimensional array, row-major and column-major orders can be generalized to arrays of any dimension.

But which of the preceding methods is used to store arrays in C/C++?

According to the comparison between cache loss rates of the two access methods of the same array in the preceding C code, it can be noted that in C/C++ code, arrays are stored in row-major order. That is, if a[i][j] is accessed in the previous loop, the access to a[i][j+1] will hit the cache. In this way, the main memory will not be accessed. Because access to the cache is faster, following the storage order of a corresponding programming language to hit the cache can implement optimization.

Other common programming languages, such as Fortran and MATLAB, use the default column-major order.

Based on the row-major order of C/C++, loop interchange uses the feature that the system tends to access values close to each other in the memory to exchange the execution order of two loops in a nested loop to increase the overall spatial locality of the code. In addition, it can enable other important code conversions. For example, loop reordering is the optimization of loop interchange that reorders two and more loops. In LLVM, to use loop interchange, enable the -mllvm -enable-loopinterchange option.

The following is an example of a matrix operation.

Code after loop interchange is performed on the j and k loops:

Does the cache hit ratio really increase in actual applications and how does the performance change?

The number of L1-dcache-loads is almost the same because the total amount of data to be accessed is the same.

In addition, the performance is improved by 9.5%.

In actual applications, not all scenarios are like the loop interchange scenario described in section 2.1.

For example, in the preceding scenario, if N is an ultra-large array, loop interchange can bring great benefits theoretically. However, an if branch judgment is added between the two loops, hindering the implementation of loop interchange.

You also need to consider whether the cost is worthwhile for such source code modification. If the if branch is entered frequently, the cost caused by subsequent rollback is high. In this case, you may need to reconsider whether the loop interchange is worthwhile. Conversely, if the branch entry frequency is low, the implementation of loop interchange can bring considerable benefits.

3. Contribution of the BiSheng Compiler to the LLVM Community #

The two patches extend the application of loop interchange to scenarios where the inner or outer loop contains more than one induction variable.

The two patches extend the application of loop interchange to scenarios where reduction calculation of the floating-point type is supported.

D120386 [LoopInterchange] Try to achieve the most optimal access pattern after interchange (https://reviews.llvm.org/D120386)

This patch enhances the interchange capability so that the compiler can permute the loop body to the globally optimal loop sequence.

In addition, the team has contributed a large number of bugfix patches to the community.

The following are enhancements to other functions:

To use loop interchange for optimization as much as possible, ensure that the access stride of arrays or number sequences between iterations is as small as possible when writing C/C++ code. The closer the stride is to 1, the higher the spatial locality is, the higher the natural cache hit ratio is, and the more ideal benefits can be obtained in performance. In addition, the storage method of C/C++ is row-major order. Therefore, when accessing a multidimensional array, ensure that the inner loop must be Column to obtain a smaller stride.

Welcome to join the Compiler SIG to communicate about compilation technologies.